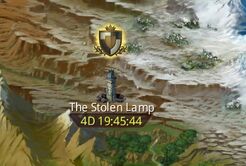 (Background artwork was re-used from The Elders' Prophecy.)

"Chaos and fear are spreading in Camelot. The demons were able to steal the lamp, which hosts Nambia Djinn and force him to fight against their enemies and terrorize Camelot. Find the stolen lamp, break the will of Nambia Djinn by defeating him and he might accept you as his new owner! "

During this event gather Magic Lamps for a chance to win fabulous riches! Be on the lookout for the one one of the strongest beings known Nambia Djinn and prepare your party to stand and fight! Defeat this powerful enemy for a chance to gain his allegiance as well as recruit many other new and exciting Heroes!

As a 7 star Hero, Nambia Djinn has an extra Heroic Power in addition to her Skill and Combos! This Heroic Power works like a one-card combo. No matter who he is paired with, Nambia Djinn's Ardent Resolve increases the Skill Proc by 12%.

(Note: his proc skill is Friend Like Me: Recover HP to your party and create a shield on them)

Equip the following cards to help increase the amount of Elder Scrolls you find during the event:

Confront Nambia Djinn  on Easy or Hard mode for a chance to earn his allegiance! The more times you defeat this boss the greater chances you'll have of acquiring him! Be warned however, this challenge is not for the faint of heart and is the most powerful boss Camelot has ever seen!