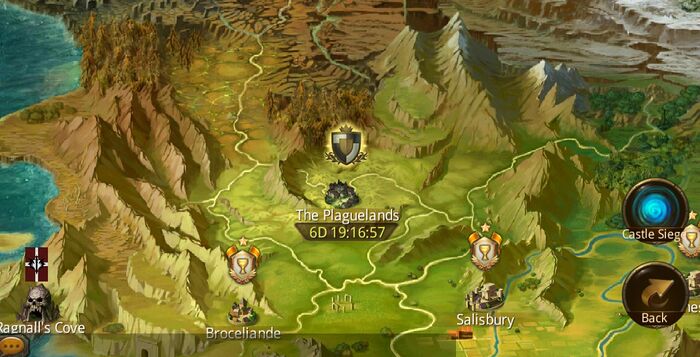 Plagulands is a limited time only city that occurred in June 2014. Plaguelands lasted seven days.

An infested wasteland has emerged in Camelot, spreading vile horrors across the lands. The druids have fled their homes, unable to contain the terrible scourge. A sickly green glow envelops the land, withering trees and wildlife alike. Only weeds have survived...weeds, and a tiny yellow flower called a Sunpetal. The land is silent save for the infrequent shriek of an animal unfortunate enough to tempt the poisoned waters...and the occasional klop klop klop of a mysterious horseman.

Heroes! King Arthur and Merlin have challenged you to save the Plaguelands from plight! Bring Merlin the most Sunpetals you can so that he may alchemize a cure, and he shall reward you handsomely.

Equip Druantia, Cernunnos, Amythestine and Cockatrice to boost your Sunpetal findings with every step!

Only those who collect the most will win the top prizes. But be wary, for Pestilence prowls the plaguelands, waiting for fresh prey.

Upon entering The Plaguelands you see the Menu options and your personal scoreboard/rank. You are given 4 choices in which you face different levels of Pestilence and also see the four different tier's artwork. 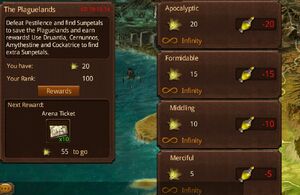 Retrieved from "https://heroes-of-camelot.fandom.com/wiki/The_Plaguelands?oldid=25423"
Community content is available under CC-BY-SA unless otherwise noted.