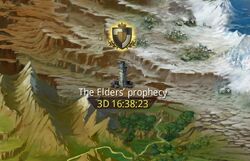 During this event gather Elder Scroll for a chance to win fabulous riches! Be on the lookout for the new queen of the shadows Morgan Le Fay Defeat this powerful enemy for a chance to gain her allegiance as well as recruit many other new and exciting Heroes!

As a 7 star Hero, she has an extra Heroic Power in addition to her Skill and Combos! This Heroic Power works like a one-card combo. No matter who she is paired with, Morgan Le Fay' Grim Augury Reduce ATK & Silence enemy party. Three times per battle.

Equip the following cards to help increase the amount of Elder Scrolls you find during the event:

Confront Morgan Le Fay on Easy or Hard mode for a chance to earn her allegiance! The more times you defeat this boss the greater chances you'll have of acquiring her! Be warned however, this challenge is not for the faint of heart and is the most powerful boss Camelot has ever seen!

Retrieved from "https://heroes-of-camelot.fandom.com/wiki/The_Elders%27_Prophecy?oldid=31038"
Community content is available under CC-BY-SA unless otherwise noted.