Sir Ywain /ɨˈweɪn/, also called Owain, Yvain, Ewain or Uwain, is a Knight of the Round Table and the son of King Urien in Arthurian legend. The historical Owain mab Urien, on whom the literary character is based, was the king of Rheged in Great Britain during the late 6th century.

Ywain was one of the earliest characters associated with King Arthur, being mentioned in Geoffrey of Monmouth's Historia Regum Britanniae. He was also one of the most popular, starring in Chrétien de Troyes' Yvain, the Knight of the Lion and appearing prominently in many later accounts. He remains Urien's son in virtually all literature in which he appears: other characters in Arthurian legend based on historical figures, for instance Sir Kay, lost their original familial connections in romance literature. 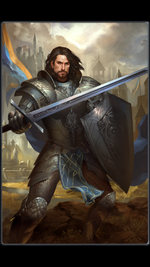 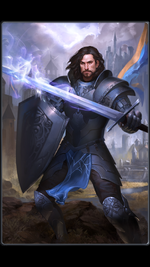 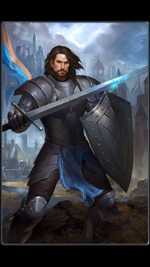 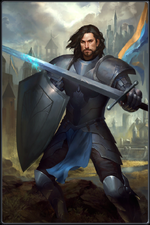 T4 - Evo 8 (Over-Leveled)
Add a photo to this gallery
Retrieved from "https://heroes-of-camelot.fandom.com/wiki/Sir_Owain?oldid=32640"
Community content is available under CC-BY-SA unless otherwise noted.