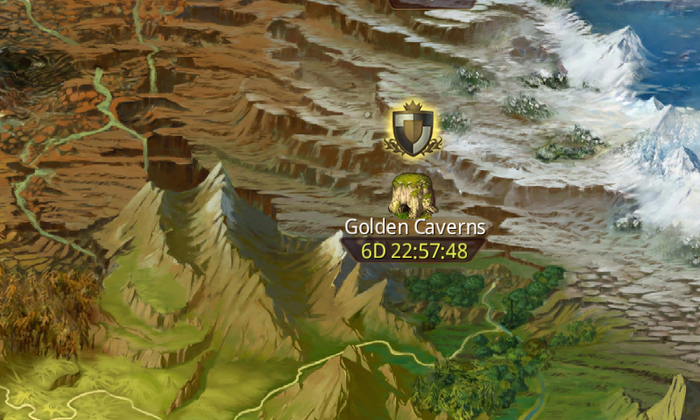 Excavators in the western mountains have uncovered caves filled with riches! The Golden Caverns shimmer day or night , and natural golden ore is ripe for mining. But something more sinister lurks in the Golden Caverns: A viscous seven-headed beast. Be wary of this foul creature, for its temper is legendary, and it's breath is fiery.

Take on Golden Galzra and the Golden Caverns now for a chance to win fantastic prizes! Collect Golden Fangs and bring them to Merlin to help win the best of rewards.

Evolve your cards for even greater bonuses!

Confront Golden Galzra, on Hard for a chance to earn his allegiance! The more times you defeat him, the greater the chance of acquiring him! But be careful, for he can strike a nasty blow!

Upon entering Golden Caverns you see the Menu options and your personal scoreboard/rank. You are given 2 choices in which you face different levels of Golden Galzra.

Only in Hard, you have a chance to win a Golden Galzra boss card.

Retrieved from "https://heroes-of-camelot.fandom.com/wiki/Golden_Caverns?oldid=25432"
Community content is available under CC-BY-SA unless otherwise noted.