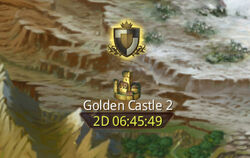 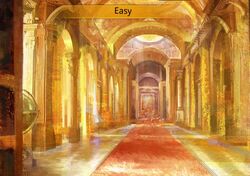 The Golden Castle has emerged again in Camelot. Defeat its imperious ruler Golden Uther, and take over his castle as you claim his Royal Flags!

During this event, collect Royal Flags for a chance to win fabulous rewards! Be on the lookout for the legendary King, Golden Uther, and prepare your Party to fight against him! Defeat this powerful foe for a chance to gain his allegiance as well as recruit many other new and exciting Heroes for your team!

As a 7 star Hero, Golden Uther has an extra Heroic Power in addition to his skill and combos! This Heroic Power works like a one-card combo. No matter who he is paired with, Golden Uther's Patriarch's Curse has a chance to decrease enemy party's Skill Proc.

Equip the following cards to help increase the amount of Royal Flags you find during the Golden Castle event:

Confront Golden Uther on Easy or Hard mode for a chance to gain his allegiance! The more times you defeat this boss the greater chances you'll have of acquiring him!