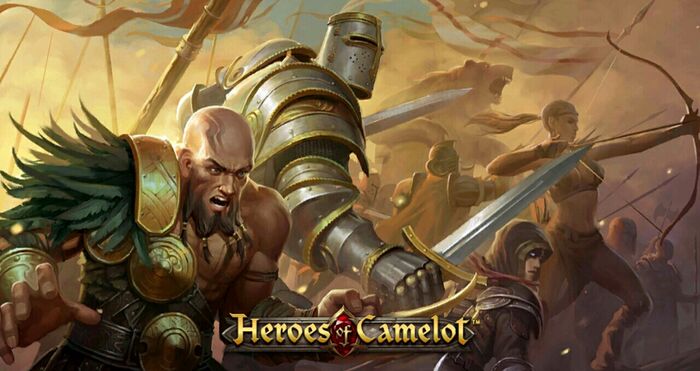 After installing Heroes of Camelot onto your mobile device, you are given a choice of origins.  In this case, you can choose Camelot or Druid.  There is no advantage or disadvantage to what side you choose but here are the differences:

If you have chosen Camelot as your Origin, your starting card will be Vanguard. The rest of your team cards will comprise of:

In your inventory slot you will have two more cards:

Note: Arcane archer is only available to first time players and not players starting fresh on a new realm.  It is received after finishing Military camp special city.

If you have chosen Druid as your Origin, your starting card will be Stormcaller. The rest of your team cards will comprise of:

In your inventory slot you will have two more cards:

Note: Arcane archer is only available to first time players and not players starting fresh on a new realm.  It is received after finishing Military camp special city.

Upon choosing your origin, you are brought to the city of Avalon. Here you take your first steps towards solving the mystery of the Holy Grail and must explore your way to save the city from Father Maleficent.  A once Heroic figure (Father Beneficent) for Camelot who fell from the light to embrace the darkness that is Morgana.  The adventure and story takes you through 10 cities (to-date; subject to change via updates).

When exploring you will collect cards that are seen within each cities sub zone.  For example, in Avalon the first zone is Plains of Camelot, you can gain the Squire card. The next zone, Blackthorne Wood, you can gain the Spy card. And this continues throughout all cities you explore. Most cards are Common and Uncommon cards that most players consider "feeder" cards. Feeder cards are a reference to cards that are normally used to help level more powerful cards (see Enhancing section).

Upon exploring you will gain:

Upon exploring you have the possibility of gaining:

These spots yield the best return on investment:

When exploring in every cities sub zones, you have a chance to fight the previous cities end boss and a chance to add their card to your collection. These bosses start out low Hit Points (or HP)/Attack Points (or ATK) but with each successful victory you have against them, they return 10% stronger and this will continue until you reach their level cap. The World Bosses page contains all roaming bosses and sub links take you to the level stat page so you can plan your decks accordingly to be the most effective against them.

Glastonbury and Southport will sometimes be the host of a additional roaming boss. These bosses have included:

They behave similarly to the roaming bosses and get stronger with each successful victory.

Temporary Events are two to seven day events that hosts a featured card for players to obtain by defeating them in the same manner as Roaming bosses. There is usually some lore around the event, such as Camelot is in danger and players need to collect special items to help keep Camelot safe. The amount of special items collected determine your server rank and rewards are given based on your final rank. You can get additional special items by having certain cards and this can be increased further by Max evolving (Tier 4).

Temporary Events have become a highly anticipated feature of Heroes of Camelot because you are given max level Tier 1 cards that drop while exploring. These cards can be used to evolve other cards, sold for gold, or you can use them for you deck. To see more about Temporary events, visit the Events page.

Cards! Cards! Cards! Yes, the whole point of this game is to collect cards to enhance your deck and make powerful combos. There are several ways to do this:

When collecting cards you can level the cards up to make them more powerful.  There are several pages on this wikia in which they tell how this is done and the benefits.  They are as follow:

Now that you know how to evolve and enhance your cards, you will notice that all cards have a specific skill in which they can "cast" upon your own team to add benefits or against your opponents in order to defeat them in Arena PVP. Skills page has an exhaustive list of the type of skills any one card can have in Heroes of Camelot game.

The next step in becoming a powerful opponent is finding specific cards that will form powerful combinations to unleash on your opponents. The combinations range from offensive to defensive. Combos page has an exhaustive list that contains all possible combinations in the Heroes of Camelot game.

A guild can have 50 members (max) at guild-level 25 (max). There can be one leader and five (max) officers who manage the guild including putting notifications, starting raids, kicking out members, etc. Only the leader has authority of changing officers.

There are three ways of joining a guild depending on how the join-type is set: freely join (any), on approval, and by invitation. The leader and officers can change the titles for members, leader, and officers.

By joining a guild, players are able to join a raid against bosses in the Ragnall Cove. This is the only way of joining a raid.

When guild members purchase gems, a certain amount of Gift Points are added to the guild. Each member can get gifts according to the level of the Gift Points. The Gift Points is reset to 0 every 24 hours.