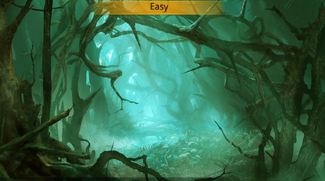 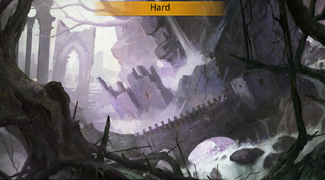 The corruption that has ruined the foundations of Camelot is strong than ever! A Dark forest that hides new obscure powers has borned! It's your duty, as Camelot hero, to make your way into the dark forest and defeat "Blighted Rhiannon", the obscure lady behind this new treat!

During this event gather Dry Branch for a chance to win fabulous riches! Be on the lookout for the most powerful and ancient beast of Camelot Blighted Rhiannon and prepare your party to stand and fight! Defeat this powerful enemy for a chance to gain his allegiance as well as recruit many other new and exciting Heroes!

(Note: this is her skill but Kabam does not check for correctness I guess, her One card combo is Sting of Grace Passive - Increase Healing Effectiveness by 150% & reflect 10% damage.)

Equip the following cards to help increase the amount of Dry Branch you find during the Dark Forest Menace:

Confront Blighted Rhiannon on Easy or Hard mode for a chance to earn her allegiance! The more times you defeat this boss the greater chances you'll have of acquiring her! Be warned however, this challenge is not for the faint of heart and is the most powerful boss Camelot has ever seen!

Retrieved from "https://heroes-of-camelot.fandom.com/wiki/Dark_Forest_Menace?oldid=30834"
Community content is available under CC-BY-SA unless otherwise noted.