Cernunnos is the conventional name given in Celtic studies to depictions of the "horned god" of Celtic polytheism. The name itself is only attested once, on the 1st-century Pillar of the Boatmen, but depictions of a horned or antlered figure, often seated cross-legged and often associated with animals and holding or wearing torcs, are known from other instances.

Umbral Spirits : Chance to revive team with 30% HP upon death. 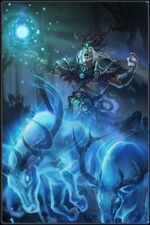 Add a photo to this gallery
Retrieved from "https://heroes-of-camelot.fandom.com/wiki/Cernunnos?oldid=21596"
Community content is available under CC-BY-SA unless otherwise noted.