View source
watch 01:36
We're Getting Mutants in the MCU - The Loop
Do you like this video?
Play Sound

Creatures are the center of the 'Heroes of Camelot' game. By exploring the world, you collect creatures in the form of cards. Each creature has their own characteristics which will indicate their usefulness. The cards vary in ranks 1 trough 7 which usually is referred to as "stars". The rank system indicates the cards quality as a card of higher rank will generally be better than a card of lower rank. 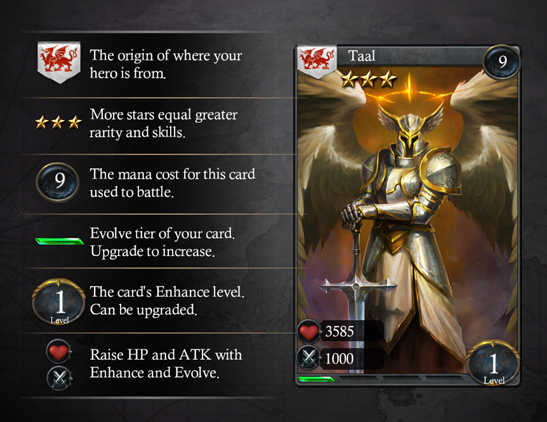 Rank - Shown by the number of stars in the upper left of the card, 1 through 7.

Max Level - Indicates the highest level the card can achieve for the tier it's currently at.

HP - Hit Points or Health Points; this is how much life a card has, in other words how much damage it can take.

Attack (Crossed swords icon) - how much damage a card can do with physical attacks.

Mana Cost (Blue potion icon) - the cost of using the card in mana.

Skill (Name of the Skill) - Describes the function of the cards skill, often activated by fullfilling different scenarios. Grows stronger by enhancing your card, as well as evolving it.

Combinations - Most cards form a combo with other cards. By doing so, the team can gain favorable bonuses to further strengthen your deck. Combinations are shown at the bottom of the card. By tapping the icons, the full details of the conditions for the combination are depicted.