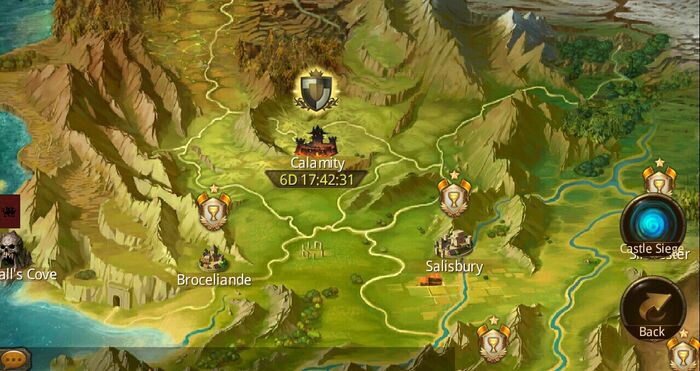 Calamity is a limited time only city that occurred in July 2014. Calamity lasted seven days.

A blazing fireball rains down on the city walls, sending stone flying across ash-covered streets. Homes and barracks and fortifications alike crumble into piles of stones. Swords clash as men tear at each other, aiming to kill. Fires erupt across the city as citizens cry out in terror and, desperated to survive, fight against former friends...for who can you trust in this Fortress of Calamity?

And from just beyond the fortress walls, the horseman stands watching the destruction unfold...just biding his time and waiting.

War has arrived, bringing naught but ruination in his wake. Merlin has tasked you with saving the few soldiers and citizens who have escaped War's violent wrath. Bring Merlin the most Healing Tonics to heal the wounded, and he shall reward you handsomely.

Only those who collect the most will win the top prizes. But be wary, for War roams the halls of the Fortress of Calamity...along with brothers Pestilence and Famine. Defeat the Horseman on Apocalyptic difficulty, and you might just earn their allegiance.

Upon entering the Fortress of Calamity you see the Menu options and your personal scoreboard/rank. You are given 4 choices in which you face different levels of War and also see the four different tier's artwork. 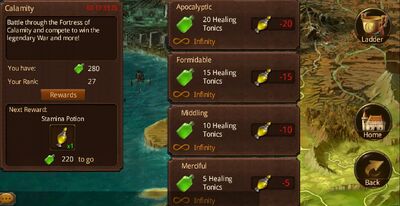 NB: when you encounter bosses but you have not beaten them, your next step could be "empty". This is because "boss encounter" will still be triggered, but since the bosses are already present, nothing will happen resulting in an "empty" step.

Retrieved from "https://heroes-of-camelot.fandom.com/wiki/Calamity?oldid=25426"
Community content is available under CC-BY-SA unless otherwise noted.