The quest save Tintagel is incorrectly spelt and says Tintagle instead. 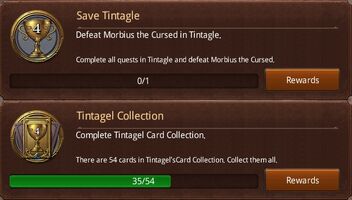 When enhancing cards, it will appear as though all your cards except for the one you are enhancing are demon cards, putting a card up to be used for enhancing will change all other cards to that type. This is only a visual glitch and your and your cards will return to normal after you leave the enhance screen.

Before adding any cards to enhance table.

After adding a camelot card to enhance table.

After adding a druid card to enhance table.

When viewing cards by browsing from other cards' Skill bonuses, their mana cost will appear as zero.

Card animations will not be shown in this case: if you have more than one copies of a card, when you put in the card for Enhancing and then click/touch the card, the usual details will be shown but the card will not be animated. This works even if you view the full screen version. This can be useful in taking screenshots of the card's evolution tiers. 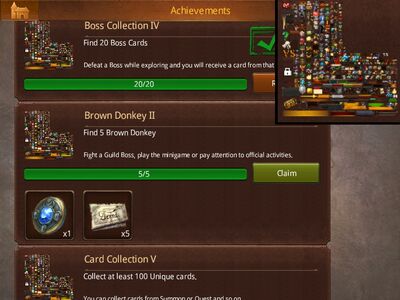 Inventory glitch where each potion is given an individual slot. 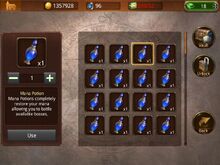 When you fight a boss and a skill gets activated which makes damage to the boss for three rounds at his attack, the damage does not get shown at his health bar (the health bar does not get updated).