Lyrith Dars-al-Karz is one of the most powerful of the pure-blooded Vampire Queens, and she claims to be the first created one of her breed. Her one and only objective is to make vampires the dominant species, taking over everything else.

She has great toughness and regeneration skills, masters the power of Fire, and also shares a few of her sisters´ abilities. But, for now, the Kingdom of Camelot is safe from her threat, as her undead armies are being consistently held by the Order of the Moon and the Northern warriors...

Some seers say she will end her Blood Wars being trapped inside Ragnall´s Cove with Ossion and friends!

Queens of Darkness : Chance to revive team with 75% HP upon death. 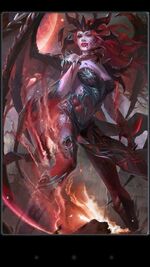 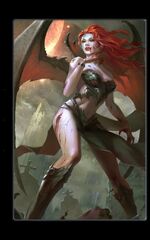 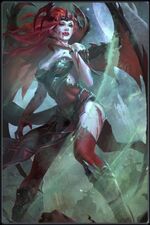 T4 blood queen 8 card gold each tear 118k plus to damage
Add a photo to this gallery
Retrieved from "https://heroes-of-camelot.fandom.com/wiki/Blood_Queen?oldid=29049"
Community content is available under CC-BY-SA unless otherwise noted.