A great behemoth of the sands, maybe as old as Earth itself. This huge beast usually lives in desert caves, preying Doomweavers or such creatures to feed.

His carapace is nearly unbreakable, his claws are strong enough to cripple rock, and the venom inside his piercing sting can obliterate anything it touches, even angels, demons, spirits or undead!

Fortunately, the Ageless Scorpion rarely comes out from his deep caves and, as any good scorpion, he is absolutely deaf. Keeping out of his sight gives great chance to escape his wrath. 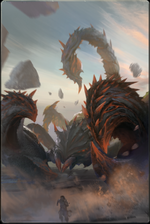 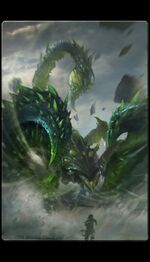 1best1 Ageless Scorpion t4 8card evo all + 2
Add a photo to this gallery
Retrieved from "https://heroes-of-camelot.fandom.com/wiki/Ageless_Scorpion?oldid=29063"
Community content is available under CC-BY-SA unless otherwise noted.